The Canadian Medical Association Journal did a review of Shane Neilson's memoir, Gunmetal Blue. Kind of fun to have his book reviewed in a medical journal. I like that the review mentions the cover design! The entire review can be found in the November issue (184. 16) 2012. #expanding the canlit poetry audience

“... initially I overlooked the graphic design on the cover of Shane Neilson’s book, Gunmetal Blue: A Memoir. Then I read his opening essay, “Uncle Miltie and the locked ward.” It’s a harrowing account of his hospitalization for a suicidal psychosis. The essay opened my eyes to the sepia-coloured specimens of brain and heart positioned like targets in the twin barrels of a shotgun — a visual compliment to poet Milton Acorn’s The Brain’s The Target. The cover’s blue-black wash becomes the fathomless perimeter of a disordered mind in a hospital room: “The hospital was gunmetal blue: madhouses are best stark.”

“I am a doctor, and I write poems,” states Neilson on the final page of the book. That sounds more straightforward than it is. The practical demands of a life in medicine and the aesthetic realities of being a writer are not easily reconciled. Add to the work of poet and doctor the preoccupations of father, son, and husband, and a man with a history of life-threatening mental illness, and it gets even more complicated. He explains in the essay, “The Practice of Poetry”: “I try to make sense of the world, of myself and others, and the major tool I use is poetry.” ... He describes the traps and disappointments — and rewards — inherent in writing. Along the way he draws inspiration and bolsters his observations and arguments with references to the work of many other writers.”

My interests are varied

A picture of the back seat of my car: ballroom dance shoes and a hacksaw. 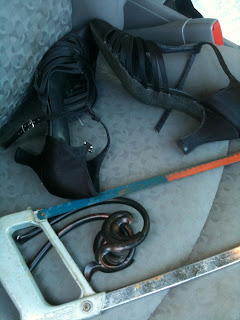