LetterMpress is a project by graphic designer John Bonadies to create a virtual letterpress environment for the iPad that will allow users to create authentic-looking letterpress designs and prints:

The design process is the same as the letterpress process—you place and arrange type and cuts on a press bed, lock the type, ink the type, and print. You will be able to create unlimited designs, with multiple colors, using authentic vintage wood type and art cuts. And you can print your design directly from LetterMpress or save it as an image or import it into other applications. 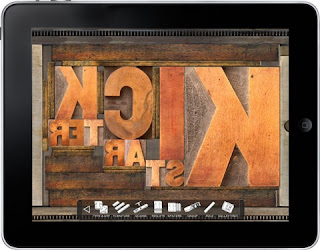 Read the entire article by clicking the link below.

http://www.casualoptimist.com/2011/03/04/lettermpress/?utm_source=feedburner&utm_medium=email&utm_campaign=Feed%3A+TheCasualOptimist+%28The+Casual+Optimist%29
Posted by Dawn Marie Kresan at 10:49 AM

Bookstore owner Kelly Hughes will hand out the prize at the Manitoba Book Awards on April 17, but in the meantime, Aqua Books is continuing its tradition of hosting nominee readings.

Jonathan Ball is the author of the poetry books Ex Machina (BookThug, 2009) and Clockfire (Coach House, 2010). He holds a Ph.D. in English with a focus in Creative Writing from the University of Calgary. His film Spoony B appeared on The Comedy Network, and his writing has appeared in The Believer and Harper’s. He is the former editor of dandelion and the former short films programmer for the Gimli Film Festival.

Ariel Gordon is a writer whose first book of poetry, Hump, was published in spring 2010. How to Prepare for Flooding, a collaboration with designer Julia Michaud, is forthcoming from JackPine Press in 2011. When not being bookish, Ariel likes tromping through the woods and taking macro photographs of mushrooms.

Lori Cayer’s second volume of poetry, Attenuations of Force, was released by Frontenac House in 2010 as a finalist in the Dektet Series. Her first poetry collection, Stealing Mercury (The Muses’ Company, 2004), won the Eileen McTavish Sykes Award for Best First Book in Manitoba in 2004, and in 2005 Lori won the John Hirsch Award for Most Promising Manitoba Writer. She serves as co-editor of English poetry for CV2 and is co-founder of the Aqua Books Lansdowne Prize for Poetry/Prix Lansdowne de poésie, part of the Manitoba Writing and Publishing Awards.
Posted by Dawn Marie Kresan at 9:04 AM

Congratulations to Ariel Gordon for being nominated in two categories!

Attenuations of Force by Lori Cayer, published by Frontenac House

Wicker Park Chocolates wanted a logotype that conveyed a friendly, accessible, and unique feel, while also retaining some sophistication. During the client interview, she described her chocolates as delicious and inexpensive. The ingredients are very accessible: milk and dark chocolate, caramel, fruit creams. Nothing too exotic or intimidating. She also indicated that her shop was casual, fun, and distinctive.

For the logotype I chose a font that has loads of personality and is the perfect balance between whimsy and sophistication. This logotype is not overly elegant and therefore doesn’t convey an expensive feel. It is unique and yet approachable.
Posted by Dawn Marie Kresan at 10:07 AM

A flee on a dog. Gosh, that is a weird tale indeed.

Don't worry little lady, I'll zap this goo creature with my eye scanner.
Posted by Dawn Marie Kresan at 9:20 AM

Labels: Book Covers, Graphic Design, Random Thoughts
Newer Posts Older Posts Home
Subscribe to: Posts (Atom)
The only means of strengthening one's intellect is to make up one's mind about nothing, to let the mind be a thoroughfare for all thoughts. —John Keats