Palimpsest Press titles can be purchased from your local bookstore or on-line. As always, we encourage you to buy locally from an independent bookstore. Sales representation is provided by The Literary Press Group of Canada and distribution is through LitDistCo. 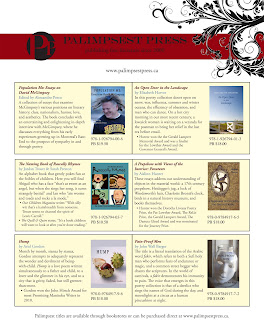 I recently received a rejection letter from a literary journal. Not so odd as I have received several over the years, but this one was different in that it had check boxes where the editor ticked the box that explained why your work was rejected. It was so terribly funny in its ruthlessness. Of course, I might have felt different if the box checked was by the line, “Your work was very bad. Very bad… Please never submit to us.” Having to send out rejection letters myself, I completely sympathize with such a statement although I couldn’t imagine actually using it. Often I have thought extensively on how to tell the poet that his/her work is very bad, without actually saying those words. I typically rely on something like “your poems have potential, keep working at it”, which is stretching the truth quite a lot. However, judging someone’s work is always subjective, and just because I don’t like it doesn’t mean that everyone else will think the same way. Plus, I hate to be mean. Wouldn’t calling the work “bad” be a devastating blow? They may stop writing altogether and if they’re passionate about writing, who am I to crush their spirit.

But despite my best attempts at diplomacy, I have received many angry notes in response to my rejection letters. People have accused me of everything from “only choosing authors who are willing to play the game”(I have no idea what that means) to “not knowing quality writing if it bit me in the face”. I have been called “cruel” and “indifferent”. Once, in an extremely long-winded letter, I was denounced for being like this poor guy’s ex-girlfriend “who gets hurt by assholes and then cries on my shoulder.” I’m not exactly sure what this has to do with his poetry submission, other than he believes women reject him wrongly, but I think his troubles are greater than this since he felt inclined to send a stranger a four-page long woe-is-me letter. However, all this nastiness got me thinking about honesty and our willingness to put it out there despite the costs. My version of charitable falsehoods provoked such fury that I doubt it would have been worse if I had said it was bad. I think people read through the niceties and assume you are saying something negative, so what happens when I really mean it, when I think the work does have potential but requires some more editing. Then what? Perhaps it comes across as dishonest when I’m not being dishonest. Sincerity is a hard thing to come by, and I don’t think as a culture we value it enough.

But where does honesty cross the line? When we don’t ask for the opinion, but it is given anyway? (“You should change before we leave. Those pants don’t look good on you”).

When the opinion is perceived as cruel? (“Why? You’re saying I look fat”).

But is it only a perception? Perhaps the person is too sensitive. (I’m insecure about my having a big ass).

Perhaps there is no cruel intent. (He thought that you’d look better in a different pair of jeans. Maybe the ultra low-rider ones that show your crack when you bend down was not your best decision.)

If the opinion was not intentionally cruel, but is none-the-less perceived as cruel, is it cruel? I guess that depends on whom you are asking. Reality is what we make it, and the reality may be that despite your intent the person finds your comment cruel. So, in the end, that has nothing to do with you. You have no control over another’s perception of reality. Your truth is based on what you know and the other person’s truth is based on his/her experiences. Ask your sibling to describe a shared event from your childhood, and you’ll see what I mean. Truth is always filtered.

I know that I am not comfortable telling someone that they are a bad writer, or even that I find their writing to be bad. I guess I am not comfortable with presenting my opinion in such unflinching terms, that is, to label it good or bad. And, for the record, I am not talking about reviews, as that is part of the literary debate and a whole other discussion. I am only referring to rejection letters and how to word them appropriately. As a publisher, I have to decide what is worthy of publication and what is not. This is not a purely subjective matter, but there is some subjectivity involved. There are many worthy titles, as I deem them, but I simply don’t have the funds and resources to publish them all and looking back over the last decade I know that my aesthetics have changed. I don’t think that my opinions are so varied, but they are fluid, and they have evolved over the last decade. But running a press means that I have to make business decisions, which requires making value judgments on a manuscript: the value to my press, the value to Canadian literature, the value to the market. Regardless of my passing judgment, which I do all the time, actually labeling a work “bad” leaves, um, a bad taste in my mouth. Perhaps I am spineless, a CanLit coward, but I think there is a certain egotism that goes with such definitive pronouncements that I simply don’t possess. So be it. In the end, I am not interested or comfortable labeling work good or bad. Frankly, I find the discussion on subjectivity and how we determine worth, either as individuals or as a community, much more interesting.

As far as cruelty goes, I never intend it with the rejection letters I send out, but seem to inflict it anyway. If I give too little then I am “indifferent” and if I give my honest opinion I am “cruel”. It seems the only good response is, “I love it and want to publish it without changing a word”. Well, if that is what you want, all I have to say is good luck with your self-publishing venture. In the end, I will continue to write very little on my rejection forms, as going through hundreds of submissions really is quite tedious and time consuming. Occasionally, if I have the time and deem the work worth the extra attention, I’ll offer some general critique and hope the person takes it for what it is — only one person’s opinion. Ignore it, consider it, refute it, do with it what you will, but when you submit your work to a publisher at a press or journal you are asking us to judge your work and, with that, there is risk.
_________________________________________________________

And by the way, low-riders that show your thong or pants slung down under your ass isn’t flattering on anyone.
Posted by Dawn Marie Kresan at 2:14 PM

This is a picture frame I bought at a yard sale. I painted the frame black, installed tiles and wire for hanging cards on. There is so much negativity in my business at the moment, having seminars called "The Death of the Book", that I have created this small yet beautiful gallery of inspirations and gratitude. I also occasionally receive what can only be called hate mail, and these notes of thanks remind me that what I do matters. It restores my heart. 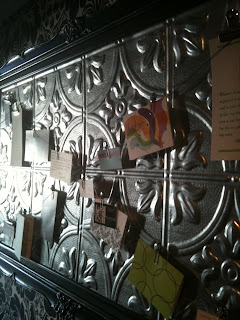 A window frame reclaimed from my husband's office. It received (not so much a restoration) but a good cleaning. I like the, um, rustic feel of it. I plan on hanging it from chains in my letterpress studio and placing wooden type on the dividers. 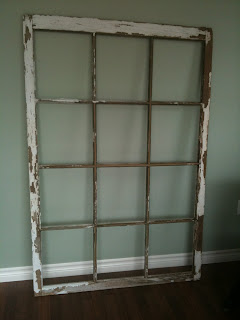 This, oddly enough, is a file cabinet. It looks a bit like an apothecary cabinet but is actually a horizontal filing system. I've never seen one before and it is quite impractical as the drawers have to be completely removed to take any files out. But I think it is beautiful and will use it anyway. Practical is as boring as Mary Jane flats. 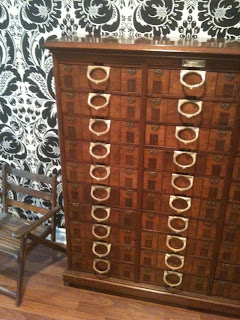 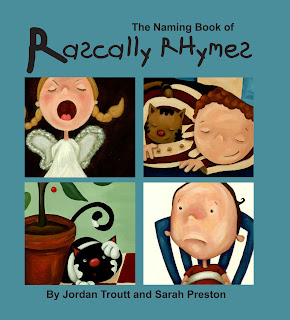 The Naming Book of Rascally Rhymes gently pokes fun at the foibles of children, and the playful, lively rhymes are written in a way that appeals at different levels to both parents and children. Here you will find Abigail who has a face “that’s as sweet as an angel, but when she sings her song, it turns strangely bestial” and Ian who “ate worms and toads and rocks a la mode.” Quill and Quire, the Canadian publishing industry magazine states that Preston’s “vivid illustrations are well-suited to the book’s playful nature… It’s a book children will want to look at after you’re done reading.”

“Jordan Troutt has penned a witty and re-readable book of deadpan rhymes… With silly wit that’s a hairsbreadth from nonsense, Troutt seems to channel the spirit of Lewis Carroll … Sarah Preston-Bloor’s whimsical illustrations are an ideal complement to the verses, colourfully depicting wide-eyed little darlings in a variety of misadventures. This is the kind of book you’ll thumb through for a giggle even when the kids aren’t around.”
— Our Children Magazine

“Troutt perfectly blends an upper level alphabet book with rhymes to produce a humorous selection of poetry. The illustrations are expressive and go hand-in-hand with the poems. This collection of rhymes is very entertaining and full of silly fun, making it great for storytelling.”
— Resource Links
Paperback now available now for $10.50.

Jonathan Ball wrote a shortish review of Hump on his blog 95 Books, in which he admits, "I enjoyed this book much more than I expected to, given that this generally isn’t my 'thing'." He also states that Gordon "has a good eye for alliteration and internal rhythm and makes better use of compound adjectives than I’ve seen in a while."

Read the entire review here.
Posted by Dawn Marie Kresan at 10:26 AM

Labels: Critical Reviews, Palimpsest Press, Reprint: Reviews
Newer Posts Older Posts Home
Subscribe to: Posts (Atom)
The only means of strengthening one's intellect is to make up one's mind about nothing, to let the mind be a thoroughfare for all thoughts. —John Keats