"I think when ordinary working people come home, turn on the TV and see a gala of a bunch of people at, you know, a rich gala all subsidized by taxpayers claiming their subsidies aren't high enough, when they know those subsidies have actually gone up – I'm not sure that's something that resonates with ordinary people." — Stephen Harper

The arts and cultural sector in Canada makes a significant contribution to the economy and it employs hundreds of thousands of workers. Employment growth in this sector has outpaced the growth of Canada’s other workforces during the last few decades. It is estimated that Canadian arts is an eighty-five billion dollar industry. This money supports not only artists, but so-called “ordinary” people whose own professions are tied to the health of this industry.

Despite Harper’s view that we artsy-types frequently attend ritzy galas, (which by the way, are privately funded and not supported by taxpayers), earnings are generally lower for cultural workers than the rest of the labour force. As Statistics Canada states, “for every successful creative and performing artist there are many with earnings below those of the average Canadian worker.” Artists have never been part of the elite rich. There are a few exceptions, those who have become moderately wealthy, but they don’t receive grants. The grants are there to keep organizations afloat and support individuals who otherwise would be unable to pursue their creative goals.

I can’t help but think that Harper wants to jeopardize an estimated six hundred thousand cultural jobs, and the billions of dollars they create, because artists don’t support him. Of course this is a generalization, but more artists than not are left of centre. Is it a coincidence that the majority of arts related jobs are in Quebec and Ontario? These two provinces, more than any others, have rejected the conservative government and now he is punishing the naughty constituents. No doubt his public spanking will backfire when he realizes that the majority of Canadians, and not just those from Quebec and Ontario, view the arts as an essential part of our heritage and our economy.
Posted by Dawn Marie Kresan at 11:14 AM 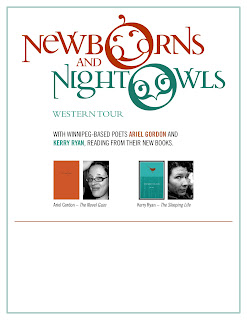 Ariel Gordon is touring with poet Kerry Ryan. Here is their schedule:

Inspired by Shawna Lemay's book cover for Calm Things, I thought I'd create my own still life using my seashell collection. 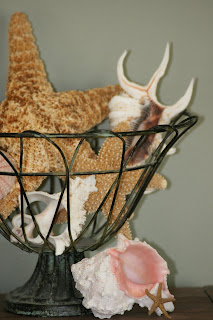 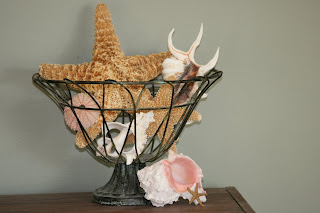 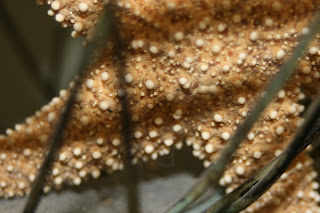 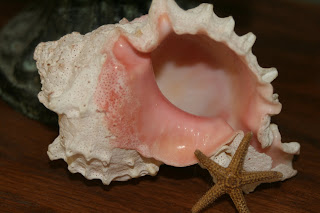 Thanks to Shawna for scanning these images of her new book for me. I've had a stream of bad luck concerning all things mechanical. Along with my scanner that is no longer working, is a broken letterpress, a computer virus systematically erasing files, and a car that stalled in the Detroit tunnel. I knew it was bad when a drunken, homeless woman offered me money to get back over the tunnel. I must have looked pathetic walking around in a confused and worrisome state with my daughter's stuffed elephant tucked under my arm. 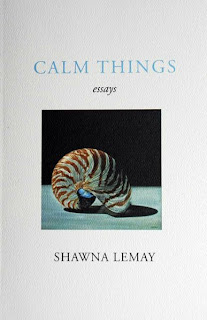 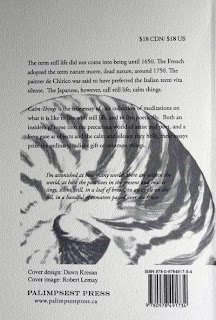 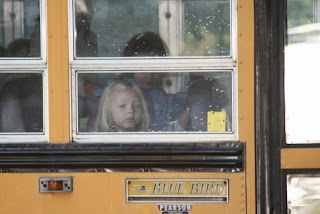 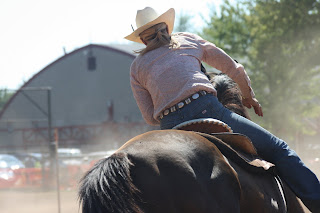 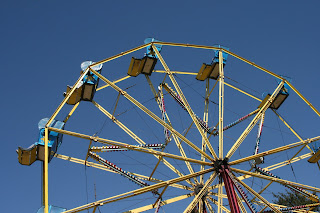 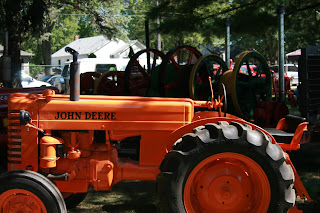 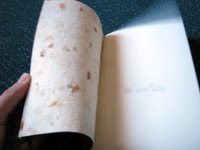 Ariel Gordon's chapbook, The Navel Gaze, is finally ready for purchase. Ariel took some lovely photographs of the finished work. 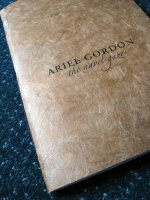 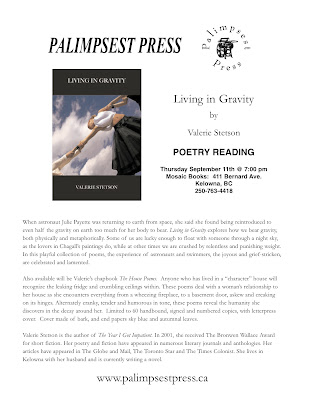 Labels: Graphic Design, Palimpsest Press, Readings and Events
Newer Posts Older Posts Home
Subscribe to: Posts (Atom)
The only means of strengthening one's intellect is to make up one's mind about nothing, to let the mind be a thoroughfare for all thoughts. —John Keats