In these poems, I have Elizabeth Siddal in conversation with Anne Sexton. Both women have many biographical similarities, like drug addiction, depression and suicide, but differ greatly in their views of artistic creation. I had a lot of fun writing the epitaph series. The circumstances surrounding Siddal’s death and exhumation are so bizarre and macabre that a little humour is required.

(The line breaks and indents are all wrong on this post, but there is nothing I can do to make blogging poetry-friendly).

A Walk Through Highgate Cemetery with Anne Sexton


Anne and I walk through the manicured grass, admire a tombstone, large with angels in carved movement, carrying the spirit of the dead beloved to some heaven or other. We read epitaphs,

Underneath this crust
Lies the mouldering dust
Of Eleanor Batchelor Stoven,
Well versed in the arts
Of pies, custards and tarts,
And the lucrative trade of the oven.

She must have been a good cook, kept her fat husband happy with bread-pudding. Then one day she got greedy with the lamb-shanks, I say, speculating on the cause of death. She wouldn’t share, and as punishment god struck her down. I think her husband missed her awfully, when she was gone. With no one to cook for him, he whittled away to nothing.

And what about this one, Anne says, pointing to a tall grey tablet.

Anne continues, I suppose she was virtuous, as men defined it in those days, sweet and humble, modestly scrubbing dirt off potatoes. Let’s say a wee grey mouse ran across her feet and gave her such a fright that she dropped dead.

I giggle shamelessly, Oh we are bad, quite disrespectful. A second nervous giggle. I’m sure they were happy enough.

Happy, exclaims Anne. What does that have to do with anything? I lived with passion. And what about you? I’m surprised you’re still alive, bloom fading and all. Not even a suicide attempt, and what are you – pushing forty? You have posterity to think about.

I’m not even close to forty, thank you very much! Besides times have changed. You still don’t buy into that death as a creative feminine act bullshit, do you?

She doesn’t answer. Ah ha! Now here’s a woman who took her art seriously. Anne is standing beside the Rossetti family plot. She reads the small, worn tablet on the ground, propped up against the large Rossetti tombstone.

I think of the dead young bride married for less than two years who, according to Anne, took her art seriously. Consider the words also, wife of, his name engraved larger than her own.

I suppose I’ll die late in life, be old, fat, and content to be remembered as a minor Canadian poet.

Here lies a poet with golden hair
Known to be both beautiful and fair,
There came a prince who swept her away,
Till death do you part was their one-act play.

A poet, fool, and lover are undeniably mad,
I’m surprised to that list, Shakespeare did not add
Scorned women who most assuredly are
All of the above, and crazier still, by far.

While young and in love, the colours of life were vivid,
The muse possessed my soul and to her work I did bid.
And there came a gentle babe inside this bony frame,
But thoughts of happiness are never the artist’s domain.
Soon fate intervened, art and life a destined still-birth
And now we all live here, under the gentle earth.

Scandal is never proper to discuss,
And yet in this grave are tales of deceit and lust
Forever my chaste mouth shall remain shut,
Unless, like my husband, you dig coffins up.

Here I lie in this grave, once more all alone,
And here on this tombstone is yet another poem.
Go on, write of my life like a fading bouquet,
How dawn was gone before the end of day.
Just be honest with yourself, my love,
For how good can it be, buried in mud.
Posted by Dawn Marie Kresan at 1:33 PM Links to this post

Hydrangea in the fall 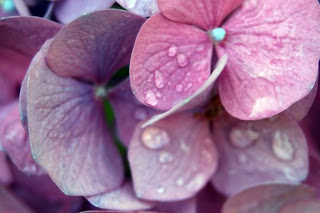 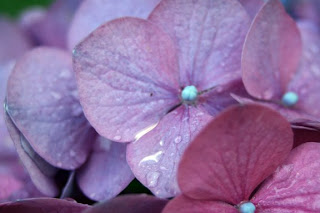 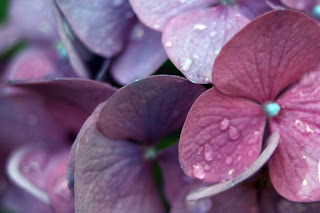 Posted by Dawn Marie Kresan at 10:55 AM Links to this post

A small offering: The cover was designed by myself and I’d like to say thanks to my cousin’s wife and friend, Jenn, who posed in a winter coat and scarf on a warm spring day, and to compliment my daughter for looking so damn cute, as always. 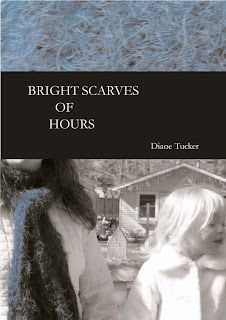 Bright Scarves of Hours is a poetry collection that explores common domestic landscapes — car-pooling with children, walking the dog, vacation snapshots and recipes. These elements weave into one woman’s vibrant inner life, transforming the mundane into a tapestry shimmering with insight and lyricism.

From an elegiac yellow morning to the dark dreams of exhausted sleep, these poems assert that no hour is an ordinary hour, and that there is no such thing, really, as an ‘ordinary’ life. Wrought with the burdens and triumphs of familiar love, the language seeks to connect us while celebrating the sometimes contrary desires and hidden grace found in the everyday.

Diane Tucker was born and raised in Vancouver, British Columbia, where she received a B.F.A. from the University of B.C. in 1987. Her first book of poems, God on His Haunches, published in 1996, was short listed for the 1997 Gerald Lampert Memorial Award. Her poetry has been published in several anthologies and appears regularly in journals in Canada and abroad. Diane lives in Burnaby, British Columbia.
Posted by Dawn Marie Kresan at 2:47 PM Links to this post

If you missed the book launch in August at Whitby’s Bookstore, you have another chance to catch Andrea reading. This time she will be at the UBC Bookstore at Robson Square, September 20th at 7pm. 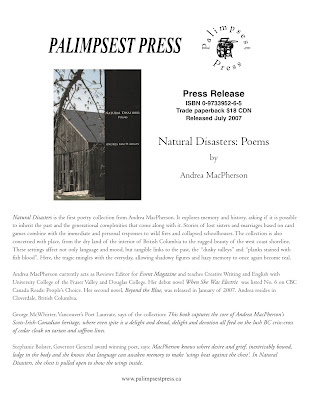 Posted by Dawn Marie Kresan at 1:44 PM Links to this post

Sometimes you just have to wonder why. 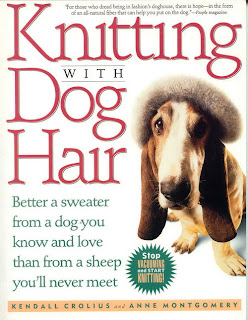 Posted by Dawn Marie Kresan at 11:49 AM Links to this post

The Modern Book Club, if that’s what you call it? 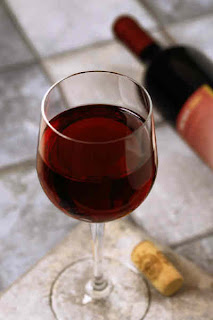 Ok, I know I’m a snob, but why do people insist that they belong to book clubs, when they don’t actually discuss books. Last week, I unintentionally offended my mother’s friend when I laughed at the term “book club” being applied to their monthly meetings that involve unlimited wine, amazing food spreads, and even more talk, none of it I would term book club discussion. I am focusing on the word “discussion” here. They do, in fact, sometimes talk about books. One woman may give a quick plot summery of a book she has read, but not too much because she doesn’t want to ruin the end for anyone else, and then another may talk about a book she didn’t like, insisting it isn’t worth picking up, and then the final woman may summarize an article she read in Chatelaine about buying organic. Forgive me, please, but I thought book clubs were meant for the discussion of a particular book that everyone attending has pre-read. I may be ignorant here, but how can you discuss a book when no one else has read it.

I have attended my mother’s book club in the past, and been somewhat confused by the whole experience. Each woman briefly talked about a book they’ve read, being coy and giving evasive comments about the book in question. “I don’t want to give anything anyway, just read it”, and then they started whipping out books from their overstuffed purses and began passing them around the table. This lending library quickly digressed into discussions about who made what salad, can you pass the havarti, and isn’t this a divine cheesecake. Then they began passing out recipes on little cards and freely distributing the wine as they gossiped about friends and neighbours.

Now I am all for a group of women coming together for some social talk and a glass of Pinot, but come on, call a spade a spade. This is no book club, so why call it one? My mother suggested that I not be so rigid in my definition and that I needed to think outside the box, or in this case, I guess she meant to think outside the book. I suppose I’m textually fixed, but I just can’t see how this term fits. Maybe “book recommendation club” would be better. But why even focus on books. Clearly the food takes precedence in importance. Why not just make it a monthly event. Have some friends over for no specific reason at all.

So, I ask myself, why does the modern woman, who is in no way a desperate housewife, need to think up an excuse to have a social gathering among her friends? I have a theory — women love theme parties. Ever since the invention of wedding and baby showers, women have come together for conversation and hearsay scandal, all with a neatly wrapped present and the best egg-salad in town. Then there were the ever-popular Tupperware parties and more recently candle and scrapbooking parties. In fact, women’s gatherings have exploded in popularity. There are now goddess parties, where each woman is required to come dressed as the goddess she most identifies with, pregnancy parties, where a woman’s friends cast her belly in clay, and pole dancing parties, where, really I’m not joking, women get in touch with their inner sexuality by learning to spin and gyrate around a pole. The varieties of women-centered parties seem endless. And what do they all have in common — women coming together for friendship and a unique experience, huddled around a buffet of decadent desserts and an abundant supply of wine.

Call it what you want, but it is defined as fun. Cheers ladies!
Posted by Dawn Marie Kresan at 12:41 PM Links to this post