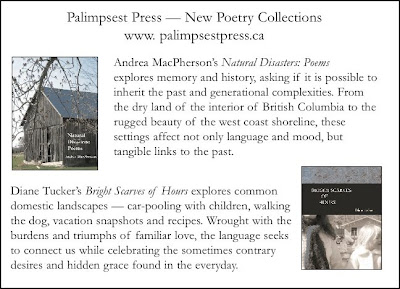 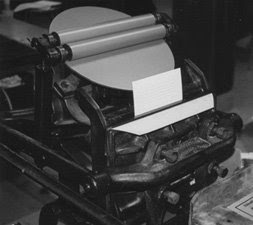 Fine Bookbinding
Palimpsest is now offering custom bookbinding services for those who want to collect letters, cards, artwork or poetry into hand-bound, beautiful books. Books can be made with soft or hard covers with various binding options available. Prices range from $20 - $50 a book, depending on complexity of design and materials used.

Letterpress Services
Custom letterpress invitations and business cards can be designed and printed using handset type and a platen press. Please email for quote, as price is determined by design and paper used. A minimum of six months is required to design, set and print.

Design & Print Services
Typesetting, cover design and professional print services are available for those who want to self-publish soft or hard cover books. Books will not be published under the Palimpsest name. Price determined by design, paper choice, number of pages and print run. Please email for quote.

Editing & Tutoring Services
Manuscript editing can be provided at a rate of $15 per hour. Tutoring services available for high school and university students who need assistance in creative writing or English Literature courses. Editing services are also available for university papers. References can be obtained upon request.

Dawn Kresan has been publishing and doing editorial freelance work for seven years. She studied desktop publishing and design using Quark Xpress and Adobe software from St. Clair College, received training from the Canadian Bookbinders and Book Artists Guild in bookbinding, learned letterpress from Hollander’s School of Book and Paper Arts, studied creative writing through Humber College, and received her B.A. and M.A. in English Literature from the University of Windsor. Her poetry has been published in a variety of Canadian literary magazines and anthologies.

Email Dawn at info@palimpsestpress.ca for more information.
Posted by Dawn Marie Kresan at 10:22 AM

My first Books in Canada review of a Palimpsest title was not for a trade poetry collection, but for a slim chapbook. Paper Lanterns, by Steven Heighton, is the second chapbook I have produced and I am very proud of it. I am fortunate that an influential paper like BIC was willing to review a chapbook at all. I’m sure the regard for Steven’s work within the literary community weighed heavily in his favour. The short review, written by Matthew J. Trafford is a rave, and I am thrilled that this little chapbook has been so well received. I am confident this will be my first sell-out.

If this chapbook were a restaurant, it would serve “pan-Asian fare”; China, Japan, Nepal, Tibet, Hong Kong, and Indonesia provide the inspirational backdrop for poems, postcards and journal entries. This is dangerous territory: the threat of appropriation lurking around every corner, whole minefields of cliché to avoid, insidiously exotic renderings of the “Other” to guard against.

Fortunately, in this case, the reader is in the hands of a capable guide. Steven Heighton has the sharpness of mind to ask: “Why do Westerners love to write about Asia?” Even if he never comes up with an answer, the question is enough, especially if it means that he ends up with sentences as memorable as this: “ . . . even now what we want is not to see into the textured density of Asia or to understand its people or learn its tongues, but to carry home a complete box of slides, a fastidious journal, silk jackets emblazoned with dragons, a Sherpa’s wool-hat, a yukata patterned with Japanese blossoms.”

Despite familiar adages about books and their covers, when it comes to chapbooks a description of the physicality of a book is germane. Paper Lanterns is an 100-copy edition, with Lokta end papers in red, St. Armand handmade paper in brown turtle, and attached Japanese Yuzen paper in brown blossoms. It is stunningly beautiful. The book also features six vivid colour photographs by Mary Huggard, four of which have literal “postcards” on the back—a date, a place, a blurry stamp, and prose which starts out grounded in the specifics of a place and wanders into the philosophical: “Disturbing to consider how much of the human brain stands empty, a disused laboratory or studio, a room with a view of mountains: locked.”

This slender chapbook from Palimpsest Press (which adapts material from Heighton’s 1989 collection Foreign Ghosts) is a foreign delicacy to be savoured, the perfect souvenir to be treasured.
Posted by Dawn Marie Kresan at 2:07 PM

On Becoming a Mother

How can I describe, within a few short lines, what is means to become a mother — the first time I looked in her face, dark eyes seeking, the open mouth fluttering like a birds. Who is this person? This small creature burrowing into me.

What took me by surprise was the sense of loss. No one talks of this, how from the moment of birth separation becomes a painful and continual process. The cord is cut, my body torn and in agony, and still, and still I feel the emptiness. She is leaving, already she is leaving.

By instinct, my arms learn to curve round her body, to fit perfectly. An extension of myself, the borders of our skin blend, and I finger the soft flesh of her earlobe. I do not want this leaving, and she cries as if in protest. I know that one day she will tie her own shoes, attend school, bring home a boyfriend. In time she will understand what those before her have felt. She will gain knowledge of transience, the orange and red dappled brightness of an autumn leaf turning grey. How the years suddenly fall away, so many minutes in a day lost or unaccounted for.

What we all seek is the same — an anchor of skin, the rhythmic sound of a steady beat when tides crash in, the right word to manifest itself when called upon. My hope is that she will find these things. That she’ll learn to value the hidden grace found in the everyday, and when contrary desires threaten to break, she will not be stunned by the paradox, but learn by instinct to bend. 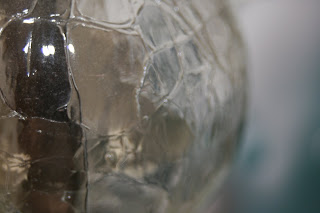 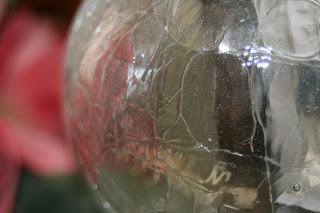 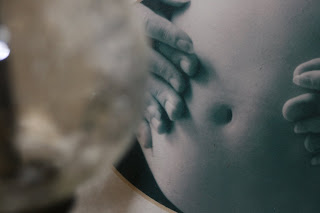 In Todd Field’s Little Children (2006), a film adaptation of Tom Perrotta’s novel by the same name, Kate Winslet and Patrick Wilson star as an adulteress couple in an upper-class suburb. It is summer, the temperature unbearably hot, and in the background there is the faint sound of a train siren. The movie meanders at a slow pace, and yet it is hypnotizing. I felt a bit voyeuristic watching these characters, perhaps the way a person feels when slowing down to look at a car wreck at the side of a road.

Winslet plays Sarah Pierce, who is unhappily married and a reluctant stay-at-home mother. She made the decision to give up her academic career because she thought it was expected of her. Her daughter seems a nuisance, and she watches the clock for the time her husband will be home so she can be released from her duties. In a difficult scene to watch, her daughter, who she describes as an “unknowable little person,” knocks on the bathroom door eager to give her mother a gift she has made. Sarah ignores her, savouring a few moments alone while remembering the touch of her lover. Naked in front of the mirror, she seems momentarily happy, her joy reborn. The temporary, if misguided, happiness that emerges in not from the new self that is “mother,” but from reawakening the buried sexual self before motherhood. This film is brutal in its unflinching portrayal of maternal ambivalence.

Sarah’s lover, Brad, nicknamed “the Prom King” by the other mothers, is also dissatisfied in his marriage. He feels emasculated, being a househusband to his intelligent and sexy wife Kate, played by Jennifer Connelly. Kate controls everything from when they have sex to how the money in the household is spent. Brad, a law student, tells his wife he is studying for the bar (which he has failed twice), but instead spends his afternoons with Sarah. They meet at the public pool, using their children’s play dates to further develop their intimacy. It doesn’t take long before they are embroiled in lies. In Little Children, there is no doubt that the children referred to in the title are not the cherubic youngsters that go swimming in the community pool. It is the adults that refuse to grow up, and yet the movie does not preach or judge, but portrays their complexity with sympathy.

This movie is about image — how we perceive ourselves and how we judge others. Sarah is not a good mother, and yet I’m sure most can identify with the feelings of boredom and resentment she sometimes feels. But are we willing to talk honestly about our personal shortcomings, or are we going to uphold the façade of an ideal? Sarah meets many people who attempt to mask their own imperfections through insidious means, usually by shifting attention onto others’ faults. There is the perfect mother who judges her for forgetting to pack snacks, the perfect wife, who schedules sex with her husband and has dinner on the table by six, and the perfect neighbour who looks down on Sarah’s unhappiness and failed marriage as pathetic.

In a rather unusual side plot, Ronnie James McGorvey, played by Jackie Earl Haley, has been recently paroled from jail after exposing himself to a child. He moves in with his mother and the local community reacts by forming a society to keep tabs on him. The themes all converge around this strangely sympathetic yet creepy figure. How do we label people: whore, failure, outcast? How do we judge ourselves? Is forgiveness and redemption possible? The movie builds to a climatic finish, and the crash that has been so heavily foreshadowed throughout the movie comes to its dramatic conclusion. Its gradual buildup accelerates quickly at the end, thrusting their seemingly unrelated lives into focus. No one can escape from society’s bright glare. And the consequences are both disturbing and unexpected.
Posted by Dawn Marie Kresan at 12:45 PM

Labels: Critical Reviews
Newer Posts Older Posts Home
Subscribe to: Posts (Atom)
The only means of strengthening one's intellect is to make up one's mind about nothing, to let the mind be a thoroughfare for all thoughts. —John Keats