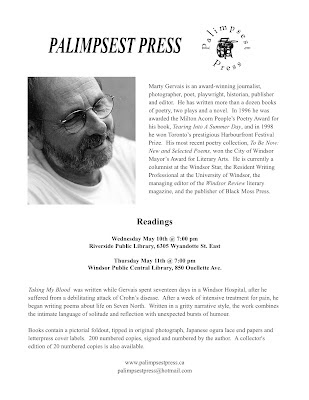 I am suffering from bouts of insomnia between animal-haunted nightmares. My wakeful pillow gives me no rest. Dreams inhabited by cunning creatures. Some out for blood while others are playfully deceitful. Most are suffering and in need of protection. There always seems to be some lame creature crying for help or about to be swallowed up. Usually set in a house or surreal structure with many rooms, trap doors, stairs that lead nowhere or to an edge that drops indefinitely. Alternately, I am in a boat adrift at sea on dark rolling waves. I fall in to discover a world where I can breathe — encounter strange creatures, some friendly, most not.
Posted by Dawn Marie Kresan at 1:33 PM

“Fucking Cat”! — that is what my two-year old daughter said. There is no doubt in my mind where she learned that word. I have a bad habit of swearing in moments of frustration, and I said the exact same words in front of her just days before. She said the “F bomb” in a rather casual way, but then looked at me and gave her mischievous smile so that I knew she was aware that it was not a word that should be uttered. Now I know that two-year olds imitate, and that I should be more careful with what I say in front of her, but even still I couldn’t help but be startled by her confidence in saying that word. Although an unwelcome fixture in my vocabulary now, I never said that word when I was young, certainly not at two or even at twelve. I was an adult, working in a factory, when I started swearing. In this setting, profanity lost its power due to sheer repetition. As with watching too much violence on television, one can simply become immune. The “F” word became like any other word, although more varied in its application. Some people used it as an adjective for a noun, any noun, no matter the context, tone or intended response. “Fucking foreman” was meant to be hostile, whereas “she is a fucking hottie” was complimentary and intended to promote reciprocal jargon. It could be used as a noun, as in “what a fuckhead.” And the phrase “fuck that fucking fucker” was the most versatile use of a word I think I have ever heard.

But now I was hearing the word come out of my sweet little girl’s mouth, and my original shock at its visceral force came storming back. As affronted as I was, I could not help being proud, just a little bit, of the way she by-passed the more trivial swearwords like “shit” and “damn” and went straight for the “f” bomb. And it was a bomb!

The problem was this. How could I appear creditable when telling her not to swear when she already knew that I did? I need my own mouth washed out with soap. So I decided to go on a swearing detox. No cursing. Cold turkey. I told her that swearing is impolite and unnecessary to get one’s point across. I told her that although she heard mommy say it, she shouldn’t be swearing either. And so a toddler and her grown mother made a deal that they would each not swear and if they heard the other swearing, then they would point it out and respectfully ask the person to not use that sort of language. She hasn’t said the word since, although I was caught once a few months later. I didn’t think it would be so fucking hard to stop swearing, but bad habits usually take awhile to break. Now that I am culpable to my two-year old, I’ll have to try harder. I wish they made a patch for it, the way they do for cigarette smokers — maybe I can get an extra-large one and just stick it over my mouth.
Posted by Dawn Marie Kresan at 10:47 PM

Icing on the Cake 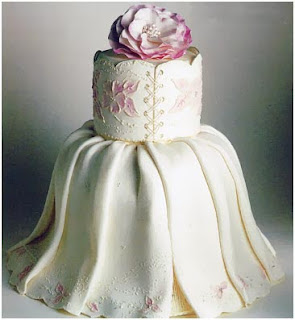 On my wedding day, my husband and I performed a traditional wedding rite — the dutiful cutting of a white frosted wedding cake in front of a photographer, who snapped as many pictures of this ritual as he did the ceremony itself. Rather silly, I thought. What is the big deal, it is only a cake?

Apparently it is a cake with a history. I recently read that the wedding cake as we know it — a multi-layered buttercream confection stacked on top of each other in a pyramid shape — became popular after Queen Victoria’s daughter wed in 1859. The cake itself, tiered cascades of frothy white embellished with the daintiest of ornaments, is a stand-in for the bride. Symbolic of her body, the cake must be pierced in a dramatic rite of passage. Although I find the historical lineage of our most cherished customs intriguing, this traditional notion inherited from the Victorian age seems, well, Victorian. I wonder if brides knew this if it would change anything. Probably not, since the white dress never went out of fashion. It seems when life’s most important moments are to be celebrated or mourned, people cling to vestiges of custom despite their symbolic hangovers.

I refused to have my daughter baptized. Not being a Christian I couldn’t think of one good argument why I’d want to symbolically cleanse my daughter of original sin. Many Christians do not know that original sin is nowhere mentioned in the Bible, that it was, in fact, Saint Augustine who developed and then popularized this belief. I consider my union with my husband a beautiful thing, and no fifth century bishop is going to tell me different. “Still,” I was asked, “what is the harm if it makes your father-in-law happy?” It is, after all, just a bit of water. The harm is in the symbolic importance. Perhaps, being a poet, I am particularity sensitive to symbolism, but I don’t see how if something is symbolic than it means it is less real in our minds and hearts. If we attribute a specific meaning to a symbolic act, then the meaning is valid.

What if, however, we are unaware of the meaning? What if we follow custom by mere habit, a learned behaviour? It is something we do because our parents did it, because others expect it. My own wedding was rather traditional in many ways. I wore white, and although knowing full well the symbolism behind that fashion statement, I chose to ignore the implications simply because I thought the satin dress in the boutique pretty. It was an off-white, if that makes any difference.

We were married outside in a public park, the sky was a pale blue and behind us was a little pond with birds. There were flowers everywhere. Our reception, small by today’s standards, was held in a country club dining hall. We celebrated with a meal of garlic roasted chicken and a vegetarian pilaf, some short and some lengthy speeches, wild and shameless dancing, plenty of drinks, and of course, a wedding cake to cut and share amongst the guests. Our cake was lavished in white buttercream frosting and each tier was covered with fresh red roses, identical to the ones in my bouquet. If one was looking for similarities between cake and bride, there it was. I guess when it comes to custom the meaning comes from those collectively involved. We ascribe meaning to what matters, and I doubt anyone there cared in the least the symbolism attributed to the white wedding dress or the cutting of the cake. To us, the cake was merely a sweet treat, and a delicious one at that.

Another custom is for the bride and groom to save the top layer of the cake and store it until their first wedding anniversary. It is considered good luck to do so, and in some cultures the top layer is saved until the christening of the couple’s first-born. Good thing we didn’t wait until our first-born, or that cake would have been seriously freezer-burnt. With today’s cakes, being light and sometimes mousse-filled delicate creations, it is perhaps unwise to save the cake at all. The fruitcake that was used for wedding cakes of our parent’s generation was more easily stored, but definitely not as tasty. I attempted to save the top tier from our wedding cake, but the memory of that luscious vanilla icing won over my desire to be sentimental, and it was unwrapped and greedily gobbled up a mere month later.

We do such silly things in the name of finding luck. In ancient times, bread was broken over the bride’s head for luck in her marriage, and although we no longer do that we still perform many rituals based on the promise of luck. We carry something burrowed and something blue, save the top layer of the cake, and although a groom no longer breaks bread on his bride’s head he is encouraged to smash cake in her face. Any rational person knows that luck cannot be found in these customs, anymore than luck is guaranteed in a favourable astrological reading. Does anyone go out and buy lottery tickets because their horoscope says they are particularly lucky this week? I hope not. But custom is custom, and people do these things because they are tradition.

Weather customs are performed due to tradition, the promise of luck, or as a symbolic rite heralding in a new stage of life, those involved have to be aware of their attitudes beforehand. A christening was too symbolically charged, and too meaningful in all the wrong ways, for me to disagree with the principle and yet go through with it to satisfy others. A white dress, though, seemed a harmless tradition. And as for that wedding cake, is was melt-in-your-mouth yummy, and being able to savour its sweetness all over again, after being frozen and then thawed, was just icing on the cake.
Posted by Dawn Marie Kresan at 1:50 PM