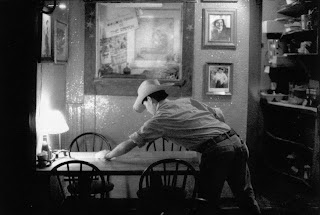 The Cowgirl Hall of Fame

Marty Gervais has contributed some excellent black and white photography to Kaleidoscope — Volume 2.1 (2001). There are also some poems published in this feature. To see it in its entirety, you can purchase the issue at www.palimpsestpress.ca.
Posted by Dawn Marie Kresan at 2:54 PM

On Factories and Ivory Towers 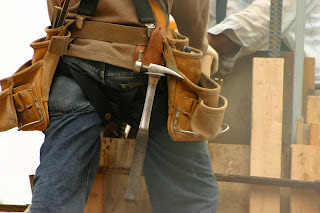 When I was in university a professor of mine asked me what it was like to work in a factory with so many sexist men who were, to say the least, rough around the edges. Her image of factory life was biased by stereotypes of hyper-macho men who equated their tool size to the penises. But to her surprise, I told her that my experience at Chrysler had been a good one, even a rewarding one. Sure, once in awhile I came across a man who thought the worst thing the big three ever did was hire women, or men who comically complained that there were fewer bathrooms for them now. But these were men who had been around long enough to remember a time when only men worked in factories, and perhaps felt nostalgic for their former all boys’ club. I never bothered arguing with men like this, because unlike their younger counterparts, they were socialized to believe women should stay at home and I think they felt a little baffled by it all.

I worked at Chrysler for six years while completing my Bachelor’s and Master’s Degrees, and during that time I heard different versions of the common “female workers are taking jobs away from men who have to support families” complaint. My response was that there are plenty of single women who have to support children, and what about all those single guys without a family not to mention the couple who requires duel-income. Another typical tirade was “women cannot do all the jobs.” This may be true, but frankly men have a hard time doing many jobs that most women find easier. Smaller hands are better when working in tight spaces under the hood, and being shorter helps when a job requires getting in and out of a van regularly. Not all factory jobs require Herculean feats of strength. Then there was the ever popular “women get special treatment from the foremen because they flirt.” Ok, this does happen sometimes. But lets be honest here — I saw just as many men get special treatment because they were drinking buddies with the right person as I have women get more washroom breaks through flirtation.

The thing is, even though I’ve listed three complaints I did hear, comments like these were infrequent. On the whole, I got along with the men I worked with – not any more or less than I got along with the women. There was the occasional sexist comment that unleashed my feminist furry, and if I was in a cantankerous mood I told the old fart that I was content in the knowledge that he would be retiring soon. Usually, however, there was nothing more than a friendly debate if the issue was brought up at all. More often than not, we got into group discussions about the weekend before and coming events for the next. We’d talk about university, families, complaints about the job, gossip about other workers “can you believe HE is wearing those daisy dukes,” and the occasional war over what music should be on the shared CD player.

My professor was under the misconception that problems in a factory would have little to do with verbal assaults and a lot more to do with groping. She was under the belief that men go around intimidating and harassing women all the time, as if constant leering, fondling and a pat on the butt are common occurrences in factories. Of course this does happen, and the frequent practice of handling sexual harassment internally by moving the guilty party to another area is ridiculously unacceptable, but my point is that it also happens in offices. One only has to think of Anita Hill and her charges against a Supreme Court Justice to realize that sexual harassment is not a blue-collar issue. Classism is what is at play here. Some believe that men in suits are more gentleman-like, as opposed to their middle-class cohorts in overalls. This form of prejudice is as bad as sexism in its ignorance. My professor, high in her ivory tower may look down at factory workers with disdain and believe that the lack of mental activity associated with factory work makes men’s brains regress to a Neanderthal state, but that simply is not the case.

My own experience with sexual harassment was not at a factory at all. I was only fifteen years old at the time, when my supervisor, who had an office with computer and post-it notes organized on a wall calendar, propositioned me for a night out. He pulled a bottle of whisky out of his desk drawer and promised a night full of fun, pleasure and sexual adventure. Of course, I am paraphrasing here. His words were much too crude to print. At my young and naive age, I did not have the language to describe what had happened to me. All I knew was that I was afraid and I did not want to be there anymore, so I immediately left his office, got on my bicycle and rode home as fast as my ten speed would take me. When I got home I told my parents I was fired. Somehow, at the time, that seemed better than telling them the truth.

Sexual harassment can happen anywhere, to anyone and by either sex. Nobody should be so quick to judge based on the conditions of the job. Mindless work does not indicate mindless men. Let us remember that the polemics of feminism is about eliminating pre-conceived notions about people. Prejudice is prejudice. If we rightfully argue that a woman can be a good factory worker, or for that matter a good foreman, let us give men the same considerations. A wrench and a penis are not predictable indicators for sexist thought.
Posted by Dawn Marie Kresan at 7:35 PM

Eligibility
Applicants must be at least eighteen years of age and live in Windsor or Essex County. The work submitted must be original and unpublished in book form. Both established and emerging authors are encouraged to submit. People who sit on the LAW executive or on a committee for LAW or the Windsor Festival of the Book are ineligible to apply.

Submission Guidelines
Submit 16-24 pages of poetry, belle-letters or a short story. All submissions must be original and unpublished. Typed submissions should be sent to the address above. Work will not be considered if sent via email. A SASE must be included if you want your work returned to you. The contest will be blind-judged. Do not include your name on the work. Please include a cover letter with your name, phone number, mailing address, a short biography and the title of your work.

Method of Assessment
Each submission will be judged by a panel of writers, publishers and editors. Submissions will be assessed only on the merit of the work. Copyright remains with the author. All decisions are final.

Reading Series
Authors chosen will be featured at one of the quarterly readings and will have a chapbook published by Literary Arts Windsor. The author will be paid in copies of the book and will also receive a reading fee. The dates of the readings are as follows:

I am swimming at the bottom of the ocean. The water is cool, only the sound of bubbles coming from my mouth. I can usually breathe under the water in my dreams. It is dark at the bottom, not much around. I am searching the floor for shells, when suddenly an enormous octopus snags me in its tentacles. They wrap around me, suckers everywhere on my skin, thick arms around my waist, legs and neck. It drags me closer to its beak, but I don’t resist. "I wish I could glide through the water like you," it says. "But you’re an octopus, you can swim," I reply. With that it releases me, sucks in a large gulp of water and thrusts itself forward with the release of water. I remember feeling confused. How come this octopus thought it was seabed bound?

I continue to swim and a manta ray glides by, scooping me up on its wing. I see its large eyes and instinctively trust it. I curl myself on its wing, feel the slow rhythmic beating like a heart beat, slow and steady, and yet we are flying fast, colours changing rapidly. It flies right out of the water, straight up into the air. Its glossy, smooth skin changes into feathers. When I look at its head, it is now an eagle. Afraid of falling, I grab its feathers roughly while trying hold on. It screams a piercing noise, rapidly flying through the tops of trees. Branches and leaves smash against my head, nearly knocking me off. I don't trust this bird, its furious wings and piercing noises. It flies into a bright, open sky and circles a few times. The light is everywhere, so bright that I bury my face into its feathers. It cries for the last time, dives straight down. I am falling, wind hitting my face... and then I am in the water again. Still holding onto the bird, I feel its skin change, turn slippery like wet rubber. It is black. I am treading at the surface in water like ink, a storming dark sky. No light anywhere. Serpents or sleek shark-like bodies churn the water. They rub against me, but I am not afraid.

This makes a really bad story, but none-the-less an interesting dream — the water/ sky, dark/light dichotomy. But what does it mean? So I'm in darkness, afraid to fly much in the same way the octopus was afraid to leave its seabed. My dreams tell me when I'm stressed or afraid, but I already know I am anxious. I wish they'd give me advice instead.
Posted by Dawn Marie Kresan at 1:06 PM

Labels: All Things Aquatic, Catalogue of Dreams
Newer Posts Older Posts Home
Subscribe to: Posts (Atom)
The only means of strengthening one's intellect is to make up one's mind about nothing, to let the mind be a thoroughfare for all thoughts. —John Keats